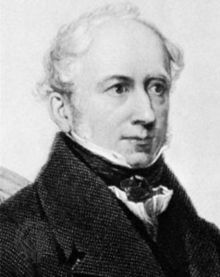 James Montgomery (4 November 1771, Irvine, Scotland – 30 April 1854, Sheffield, England) was a British poet, hymnwriter and editor. He was particularly associated with humanitarian causes such as the campaigns to abolish slavery and to end the exploitation of child chimney sweeps.

Montgomery was born the son of a pastor and missionary of the Moravian Brethren. He was sent to be trained for the ministry at the Moravian School at Fulneck where secular studies were banned, but James nevertheless found means of borrowing and reading a good deal of poetry and made ambitious plans to write epics of his own. Failing school, he was apprenticed to a baker in Mirfield, then to a store-keeper at Wath-upon-Dearne. After further adventures, he moved to Sheffield in 1792 as assistant to Joseph Gales, auctioneer, bookseller and printer of the Sheffield Register. In 1794, Gales left England to avoid political prosecution and Montgomery took the paper in hand, changing its name to the Sheffield Iris. These were times of political repression and he was twice imprisoned on charges of sedition.

Meanwhile Montgomery was continuing to write poetry and achieved some fame with The Wanderer of Switzerland (1806), a poem in six parts written in seven-syllable cross-rhymed quatrains. This success brought Montgomery a commission from the printer Bowyer to write a poem on the abolition of the slave trade. The four-part poem in heroic couplets appeared in 1809 as The West Indies.

After retiring from newspaper editorship, Montgomery's only other long poem is The Pelican Island (1828), nine cantos of descriptive blank verse. But Montgomery himself expected that his name would live, if at all, in his hymns. Some of these, such as Hail to the Lord's Anointed, Prayer is the Soul's Sincere Desire, Stand up and bless the Lord and the carol Angels, from the Realms of Glory, are still sung. The earliest of his hymns dates from his days in Wath on Dearne and he added to their number over the years.