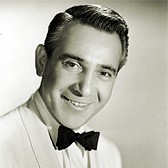 Jack Lawrence was born Jacob Louis Schwartz. He wrote songs while still a child, but because of parental pressure after he graduated from Thomas Jefferson High School, he enrolled in the First Institute of Podiatry where he received a doctoral degree in 1932. The same year, his first song was published and he immediately decided to make a career of songwriting rather than podiatry. That song, Play, Fiddle, Play, won international fame and he became a member of ASCAP that year at age 20.

In the early 1940s Lawrence and several fellow hit makers formed a sensational review called "Songwriters on Parade", performing all across the Eastern Seaboard on the Loew's and Keith circuits.

One of Jack Lawrence's first major songs after leaving the service was Yes, My Darling Daughter, introduced by Dinah Shore on Eddie Cantor's radio program. The song was Shore's first record. His song, If I Didn't Care, introduced the world to The Ink Spots. And, although Frank Sinatra was already a well-known big band singer, Lawrence's All or Nothing at All was Sinatra's first solo hit.

Lawrence also wrote the lyrics for Tenderly, Rosemary Clooney's trademark song (in collaboration with composer Walter Gross), as well as the English language lyric to Beyond the Sea (based on Charles Trenet's French language song La Mer), the trademark song for Bobby Darin. Another French song for which Lawrence wrote an English lyric was La Goualante de Pauvre Jean, becoming The Poor People of Paris. Together with Richard Myers he wrote Hold My Hand, which was featured in the film Susan Slept Here and nominated for the 1954 Academy Award for Best Song. And he even wrote the novelty song Never Smile at a Crocodile.