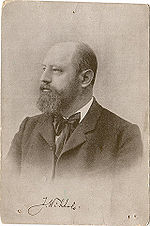 Vītols, the son of a schoolteacher, began his studies in composition in 1880 at the Saint Petersburg Conservatory with Nikolai Rimsky-Korsakov. After graduating in 1886, he remained at the Conservatory to teach composition and reached the rank of professor in 1901. His pupils there included Nikolai Miaskovsky and Sergei Prokofiev. Vītols was a close friend of fellow professors Alexander Glazunov and Anatoly Lyadov. Besides academia, Vītols also spent time as a music critic for the St Petersburger Zeitung from 1897 to 1914.

In 1918, Vītols returned from Russia to his newly independent Latvia to conduct the Latvian National Opera. The following year, he established the first Latvian Conservatory of Music, which was later renamed the Jāzeps Vītols Latvian Academy of Music in his honor, and he ran the composition classes there between 1919 and 1944. He also helped co-found the Latvian Composers' Society in 1923. In 1944, he moved to Lübeck in Germany and lived there until his death in 1948.

He is considered one of the fathers of Latvian classical music. Taking his cue from his Russian colleagues, Vītols became the leading exponent of national romanticism in Latvia. He is considered to be the father of a distinctively Latvian classical music, being the first Latvian composer to achieve international stature. His work reveals the undeniable influence of his teacher Rimsky-Korsakov, not least in the brilliance of its orchestration, an assessment which was shared by Vītols' friend and fellow composer Alexander Glazunov. During his time in Russia, Vītols became deeply interested in Latvian folklore and conducted the Latvian Choir in Saint Petersburg. His melodies clearly draw upon his heritage, and often directly feature Latvian folk tunes. In striving to forge a musical style for Latvia, Vītols emulated the processes of the Russian national school. His large-scale works, which are mostly cast in sonata form, are often characterized by impressive dramatic development. Overall, in comparison with many other 20th-century composers, he tended to be rather conservative but nonetheless possessed a masterly composition technique.

Vītols was active not only as a composer, pedagogue, and conductor, but was also a pianist and prolific music critic. He was a member of Latvian student fraternity Fraternitas Lataviensis.