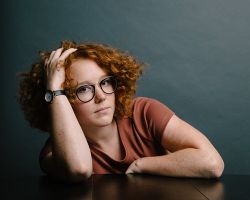 1. You Look Marvelous
2. Everything Is Fine
3. Is It Worth It

It's for Us reflects the complicated relationship of a mother and daughter, further exacerbated by the hugeness of the characters portrayed, Judy Garland and Liza Minnelli, the colossal public expectation that was thrown onto each of them and the ultimate cost of celebrity. It is a relationship so complex, you can both float in its many beauties and drown in its deep undercurrents. It is tragic and miraculous, it is drenched in addiction, and that is all to say that is about fierce. women.

The title of the piece is meant to convey a particular statement Judy Garland made to her daughter Liza. The quote, "Give the people what they want, then go eat a hamburger" is typical Judy in its sarcasm that is actually not sarcastic at all. Judy gave us everything she had. She gave her daughter everything she could, though it wasn't enough. Liza fought for her mom, then fought to get out from underneath her, then fought her same battles. These two are a tornado of sharpness, eccentricity and they are for us.

It's for Us was commissioned by and is dedicated to the Mid America Freedom Band, Kansas City, Missouri, artistic director Lee Hartman. Tajma Stetson performed as Liza/Clarinet and Mrs. Jones as Judy/Bassoon for the premiere on May 2, 2020 [ed. delayed due to COVID-19 coronavirus quarantines], at the Gem Theater, Kansas City, MO with support from ArtsKC and Missouri Arts Council. The commission resulted from MAFB (affectionately referred to locally as "The Big Gay Band") wanting a piece for their 17th season, "Kyngs and Qweens," composed by a local queer composer, featuring two local professional musicians who are also superb, award-winning drag queens, that was based on the relationship between two of the biggest gay icons Judy Garland and Liza Minnelli.

The score includes suggested staging directions and blocking for the soloists performing in drag. The parts of the two solo drag queens are played by the solo clarinet and solo bassoon. The soloists are meant to perform in Judy and Liza drag akin to Michael Daugherty's Dead Elvis in which the solo bassoonist performs in an Elvis costume.