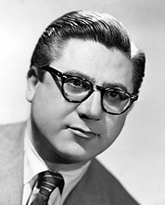 Szathmary was a child prodigy pianist from the age of five. Before graduating from Quincy High School in 1925, he adopted the name "Irving". At the same time he formed a band with his brother Albert, the Szathmary Symphonic Syncopaters.

Szathmary began arranging for a variety of orchestras, including Benny Goodman in 1934, Emery Deutsch in 1935, Artie Shaw in 1936, and Andre Kostelanetz from 1936 to 1977 and from 1937, Paul Whiteman until joining Jack Teagarden in 1940. During World War II he transcribed many orchestral pieces on V-Disc for American servicemen and began recording arrangements for featured singers such as Frank Sinatra and Mary Martin. He composed a hit song, Leave It to Love, in 1948.

He composed the music for a 1950 United Nations radio program about drug addiction called The Shooting Gallery that was narrated by Gary Cooper. Later in the 1950s he arranged music for Your Hit Parade and The Ed Sullivan Show.

Szathmary retired to Malta when the series left the air.