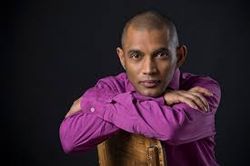 “Like all artists who are not authors and who have come upon Italo Calvino’s breathtaking book Invisible Cities, I was indelibly moved, questioning the possibility of making my own creations inspired by his otherworldly imaginings. The stories themselves call for a grand palette of colour, and when the opportunity to write for percussion soloists and large wind ensemble came along, I saw a good fit. I am so very grateful to TorQ and to Darrin Oehlerking for creating the wonderful opportunity to realize this music, and for the generous support of Arts Nova Scotia. It has been a privilege to visit Saskatoon to work with the students of the USWO.

"The music of this project has evolved into a five-movement concerto for percussion quartet and wind ensemble entitled Invisible Cities. Each movement is a musical response to a different Calvino City, from the musical symmetries of Valdrada and the Gamelan-inspired Armilla, through the Senegalese rhythms of Chloe and South-Indian rhythms of Ersilia, to the fractal-inspired Olinda. Excerpts from the stories of these Invisible Cities are here for you to enjoy.”

Valdrada The ancients built Valdrada on the shores of a lake, with houses all verandas one above the other, and high streets whose railed parapets look out over the water. Thus the traveler, arriving, sees two cities: one erect above the lake, and the other reflected, upside down. Nothing exists or happens in the one Valdrada that the other Valdrada does not repeat, because the city was so constructed that its every point would be reflected in its mirror, and the Valdrada down in the water contains not only all the flutings and juttings of the facades that rise above the lake, but also the rooms’ interiors with ceilings and floors, the perspective of the halls, the mirrors of the wardrobes.

At times the mirror increases a thing’s value, at times denies it. Not everything that seems valuable above the mirror maintains its force when mirrored. The twin cities are not equal, because nothing that exists or happens in Valdrada is symmetrical: every face and gesture is answered, from the mirror, by a face and gesture inverted, point by point. The two Valdradas live for each other, their eyes interlocked; but there is no love between them.

Armilla Whether Armilla is like this because it is unfinished or because it has been demolished, whether the cause is some enchantment or only a whim, I do not know. The fact remains that it has no walls, no ceilings, no floors: it has nothing that makes it seem a city except the water pipes that rise vertically where the houses should be and spread out horizontally where the floors should be: a forest of pipes that end in taps, showers, spouts, overflows. Against the sky a lavabo’s white stands out, or a bathtub, or some other porcelain, like late fruit still hanging from the boughs. You would think that the plumbers had finished their job and gone away before the bricklayers arrived; or else their hydraulic systems, indestructible, had survived a catastrophe, an earthquake, or the corrosion of termites.

I have come to this explanation: the streams of water channeled in the pipes of Armilla have remained in the possession of nymphs and naiads. Accustomed to traveling along underground veins, they found it easy to enter the new aquatic realm, to burst from multiple fountains, to find new mirrors, new games, new ways of enjoying the water. Their invasion may have driven out the human beings, or Armilla may have been built by humans as a votive offering to win the favour of the nymphs, offended at the misuse of the waters. In any case, now they seem content, these maidens: in the morning you hear them singing.

Chloe In Chloe, a great city, the people who move through the streets are all strangers. At each encounter, they imagine a thousand things about one another; meetings which could take place between them, conversations, surprises, caresses, bites. But no one greets anyone; eyes lock for a second, then dart away, seeking other eyes, never stopping. A girl comes along, twirling a parasol on her shoulder, and twirling slightly also her rounded hips. A woman in black comes along, showing her full age, her eyes restless beneath her veil, her lips trembling. A tattooed giant comes along; a young man with white hair; a female dwarf; two girls, twins, dressed in coral. Something runs among them, an exchange of glances link lines that connect one figure with another and draws arrows, stars, triangles, until all combinations are used up in a moment, and other characters come on to the scene: a blind man with a cheetah on a leash, a courtesan with an ostrich-plume fan, an ephebe, a Fat Woman. And thus, when some people happen to find themselves together, taking shelter from the rain under an arcade, or crowding beneath an awning of the bazaar, or stopping to listen to the band in the square, meetings, seductions, copulations, orgies are consummated among them without a word exchanged, without a finger touching anything, almost without an eye raised.

Ersilia (Cadenza) In Ersilia, to establish the relationships that sustain the city’s life, the inhabitants stretch strings from the corners of the houses, white or black or grey or black-and-white according to whether they mark a relationship of blood, of trade, authority, agency. When the strings become so numerous that you can no longer pass among them, the inhabitants leave: the houses are dismantled; only the strings and their supports remain.

From a mountainside, camping with their household goods, Ersilia’s refugees look at the labyrinth of taut strings and poles that rise in the plain. That is the city of Ersilia still, and they are nothing. They rebuild Ersilia elsewhere. They weave a similar pattern of strings which they would like to be more complex and at the same time more regular than the other. Then they abandon it and take themselves and their houses still farther away.

Thus, when traveling in the territory of Ersilia, you come upon the ruins of the abandoned cities, without the walls which do not last, without the bones of the dead which the wind rolls away: spiderwebs of intricate relationships seeking a form.

Olinda In Olinda, if you go out with a magnifying glass and hunt carefully, you may find somewhere a point no bigger than the head of a pin which, if you look at it slightly enlarged, reveals within itself the roofs, the antennas, the skylights, the gardens, the pools, the streamers across the streets, the kiosks in the squares, the horse-racing track. That point does not remain there: a year later you will find it the size of half a lemon, then as large as a mushroom, then a soup plate. And then it becomes a full-size city, enclosed within the earlier city: a new city that forces its way ahead in the earlier city and presses its way toward the outside.