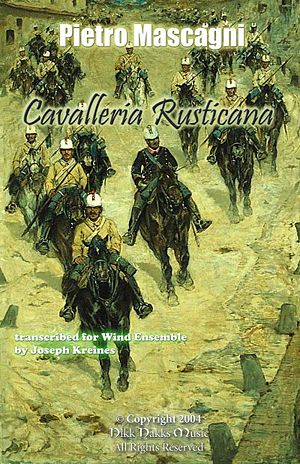 Cavalleria Rusticana (Rustic Chivalry) is an opera in one act by Italian composer Pietro Mascagni (1863-1945). It was premiered on 17 May, 1890, at the Teatro Costanzi in Rome, Italy. The libretto, written by Giovanni-Targioni-Tozzetti and Guido Menasci, was based on the short story of the same title by novelist Giovanni Verga. Mascagni submitted Cavalleria Rusticana as an entry in a contest for the best unpublished one-act opera, sponsored by the music publisher Casa Sonzogno. It won first prize, and it was considered a great success at its first performance; however, none of Mascagni’s 14 subsequent operas met with great success. Due to its brevity, Cavalleria Rusticana is often paired with another one-act opera, most often Leoncavallo’s Pagliacci.

In the opera, two sweethearts, Lola and Turiddu, are separated by Turiddu’s military service. In his absence, Lola marries a local man (Alfio). When Turiddu returns he is angry and begins an affair with a local girl to arouse Lola’s jealousies. Despite their relationships to others, Lola and Turiddu resume their love. When Alfio discovers this, he challenges Turiddu to a duel, and Turiddu is killed. The Intermezzo is the best-known melody from the opera.

This composer primarily wrote operatic music. Other transcriptions of his works include: