In the House of Tom Bombadil 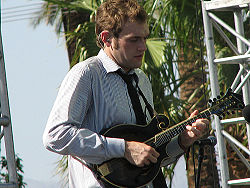 In the House of Tom Bombadil is an original work by Chris Thile of Nickel Creek, a progressive bluegrass trio from California consisting of mandolin, fiddle and guitar. The song is featured on the group’s eponymous 2000 album. Despite the original instrumentation, the members of the U.S. Air Force Concert Band’s Saxophone Quartet thought the jolly, virtuosic nature of the work would lend itself perfectly to their saxophone lineup. They enlisted the help of Tech. Sgt. Tadd Russo, a staff arranger for the band, who was more than happy to get in on the fun.

JRR Tolkien fans may recall the character Tom Bombadil from The Lord of the Rings trilogy -- a spry fellow, with a quick, playful wit. It is therefore an apt title to the work, considering the agility needed to play all the notes contained In The House of Tom Bombadil.