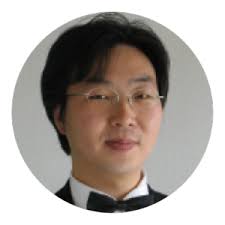 Hirozaku Fukushima (b. 30 July 1971, Maebashi, Japan) is a Japanese composer and arranger.

Fukushima graduated from Maebashi-Minami High School and earned a Bachelor’s degree from Tokyo College of Music, along with a Certificate Diploma in Music.

Currently, Fukushima is active as a composer and arranger of music for band and orchestra. He was nominated for the Asahi Composition Prize for his work Harvest Waves, and gained that prize in 1999 for his work, Chant for Dosozin. He also won the Japan Bandmasters Association Shitaya Prize for his Ryujo no Mai in 2001. He is director of wind band composition at the National Cultural Festival held in Gumma in 2001.