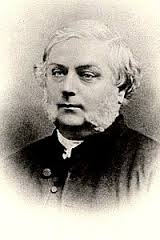 Gauntlett's father, who was Vicar of Olney, Buckinghamshire, appointed Henry organist there when he was only ten years old. Despite his considerable musical ability, Henry was articled to a London solicitor in 1826. He became a solicitor in 1831 and practiced law for 15 years.

He was named organist at St. Olave’s, Southwark, in 1827 and soon became recognized as a brilliant performer. In 1846, he was chosen by Felix Mendelssohn to play the organ part in a production of Elijah. He held other organist positions but is chiefly remembered today for his innovations in organ design and the compilation of hymn books.

In 1852 he patented an "electrical-action apparatus" for organs. He wrote much music and over 1,000 hymn tunes, and edited a large number of hymn books. His most famous tune is Irby, the tune to which the Christmas carol Once in Royal David’s City is usually sung.