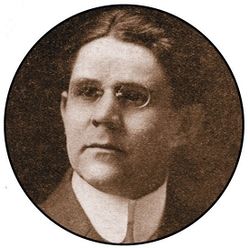 Alford was raised in Michigan. As a boy, he played the slide trombone, piano, and organ and was a self-taught composer and arranger. He studied at the Dana Musical Institute in Warren, Ohio, now part of Youngstown State University. He worked as a church organist and performed with touring minstrel shows, Wild West shows, and theatrical troupes.

In 1903, Alford tired of traveling and organized his own free-lance arranging bureau in Chicago. This was a novel idea at that time, since arranging was considered to be a mere sideline, and Alford was ridiculed when he made it known that he intended to make a full-time living as an arranger. However, the laughter subsided when he found jobs scoring the pit orchestra music for the famous comedienne Eva Tanguay (The “I Don’t Care Girl”), and notated some of the songs of balladeer Carrie Jacobs-Bond.

Alford elevated the arranger’s role to that of a creative artist; his ingenious and quirky orchestrations were a sensation. By 1910, his clientele, particularly in the field of vaudeville, was enormous. He arranged and orchestrated the music of many of America’s leading popular composers and songwriters, including Scott Joplin, W C Handy, Irving Berlin, Charles L Johnson, and many others. In addition, bandmasters John Philip Sousa, Patrick Conway, Arthur Pryor, Albert Austin Harding, and Merle Evans were loyal customers for not only Alford’s arrangements but his original band compositions as well. From 1904 to 1924, the Harry L. Alford Studio (which continued operations until 1940) produced over 34,000 separate arrangements.

Today, Alford is best remembered as a composer of excellent marches (his most enduring being The Purple Carnival and Glory of the Gridiron), as well as for his Hungry Five folios for little German band. He was a pioneer in both the school band movement and in the development of the football game half-time show.