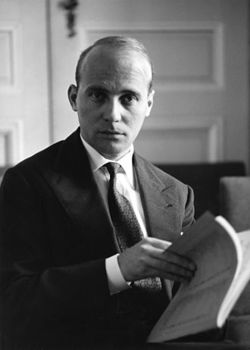 Henze was born in Gütersloh, Westphalia, the eldest of six children of a teacher, and showed early interest in art and music. That and his political views led to conflict with his conservative father. Henze's father, Franz, had served in the First World War. Although the Henze household was filled with talk of current affairs, Hans was also able to hear broadcasts of classical music (especially Mozart) and eventually his father realized that his son had a vocation as a musician. Henze began studies at the state music school of Braunschweig in 1942, where he studied piano, percussion, and theory. Henze had to break off his studies after being conscripted into the army in 1944, towards the end of the Second World War. He was trained as a radio officer. He was soon captured by the British and held in a prisoner-of-war camp for the remainder of the war. In 1945 he became an accompanist in the Bielefeld City Theatre, and continued his studies under Wolfgang Fortner at Heidelberg University in 1946.

Henze had some successful performances at Darmstadt, including an immediate success in 1946 with a neo-baroque work for piano, flute and strings, that brought him to the attention of Schott's, the music publishers. He also took part in the famous Darmstadt New Music Summer School, a key vehicle for the propagation of avant-garde techniques. At the 1947 summer school, Henze turned to serial technique. Henze moved to Italy in 1953, where he remained for the rest of his life.

Henze's large oeuvre of works is extremely varied in style, having been influenced by serialism, atonality, Stravinsky, Italian music, Arabic music and jazz, as well as traditional schools of German composition. In particular, his stage works reflect "his consistent cultivation of music for the theatre throughout his life".