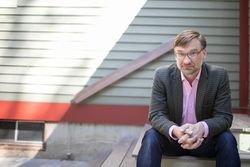 Gregory Brown is the son of a mathematician father and church organist mother. He attended Phillips Exeter Academy, and as an Amherst College undergraduate, he initially majored in geology, then switched to pursue music instead, becoming a composer and conductor. He holds degrees from the Hugh Hodgson School of Music (University of Georgia), Westminster Choir College, and Amherst College, where he studied with the Pulitzer Prize-winning composer Lewis Spratlan.

Brown's works have been performed across the United States and Europe, including Carnegie Hall in New York City, Cadogan Hall in London, and the Concertgebouw in Amsterdam. His commissions for vocal ensemble New York Polyphony have been heard on American Public Media's Performance Today, BBC Radio, Minnesota Public Radio, Kansas Public Radio, and Danish National Radio. Brown is best known for his Missa Charles Darwin, a work combining the structure of the standard mass with texts from Charles Darwin, which is featured in his brother Dan Brown's novel Origin.