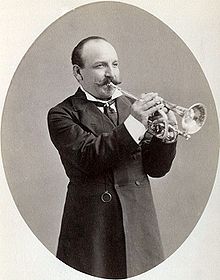 Jules Levy, considered by many as the greatest cornet soloist of his era, gained his primary fame while playing with Patrick Gilmore and his band. He wrote many solos of which the Grand Russian Fantasia remains best known; cast with an opening melodic passage, the theme is followed by two variations and a Finale, a true triple tonguing tour de force.

A tradition of brass playing (especially horn bands) in pre-Revolutionary Russian provided a backdrop for the enthusiastic embracing of modern brass instruments, and dazzling solo performance was inspired b the influence of foreign performers, including cornet virtuosi Jean-Baptiste Arban and Jules Levy in the 1870s. Levy, having performed with the Grenadier Guard Band, the Royal Opera House in London, the Theodore Thomas Orchestra, Fiske's Concert Band, and finally with Gilmore's Band, became one of the great showmen of the day. Levy's favorite programmed solos were of the theme-and-variations genre. Frequently performed solos with Carnival of Venice, Grand Russian Fantasia, Levyathon Polka, and his own Whirlwind Polka, made famous years earlier in his youth. This dazzling composition features an ever-increasingly challenging cornet part, and the finale features God Save the Czar, the Russian national anthem (also heard in Tchaikovsky's 1812 Overture and Marche Slav).