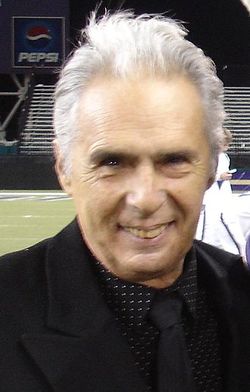 This is best known as the theme from Rocky, the 1997 [sic: 1976] smash hit for composer, conductor and Oscar winner Bill Conti. The Japanese arranger Naohiro Iwai has taken this exciting piece and made it into a stirring concert item for concert band.

Gonna Fly Now, also known as Theme from Rocky, is the theme song from the movie Rocky, composed by Bill Conti with lyrics by Carol Connors and Ayn Robbins, and performed by DeEtta West and Nelson Pigford. Released in February 1977 with the movie Rocky, the song became part of American popular culture after main character Rocky Balboa as part of his daily training regimen runs up the 72 stone steps leading to the entrance of the Philadelphia Museum of Art in Philadelphia and raises his arms in a victory pose, while the song plays. The song was written in Philadelphia. The song is also often played at sporting events, especially at sporting events in the city of Philadelphia or featuring sports teams from there.