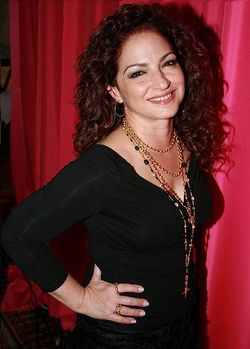 The Fajardo family fled to Miami, Florida, as a result of the Cuban Revolution and settled down there. Gloria graduated from the University of Miami in 1979 with a BA in psychology, with a minor in French, and became a U.S. citizen in 1974.

She started off her career as the leading vocalist in the group called "Miami Latin Boys" which was eventually known as Miami Sound Machine. Starting in 1977, Miami Sound Machine began recording and releasing various albums, including Eyes of Innocence, Primitive Love, and Let It loose. Gloria married the Miami Sound Machine's band leader, Emilio Estefan, in 1978.

A jukebox musical, On Your Feet!, about the life of Gloria and Emilio Estefan premiered on Broadway November 5, 2015. Estefan has appeared in two films, Music of the Heart (1999) and For Love or Country: The Arturo Sandoval Story (2000). She also has written two children's books: The Magically Mysterious Adventures of Noelle the Bulldog (2005) and Noelle's Treasure Tale (2006). Gloria and Emilio Estefan own several business establishments, including several Cuban-themed restaurants (Bongos Cuban Café, Larios on the Beach).

In addition to her seven Grammys, Estefan has received many other awards. In May 1993, she received the Ellis Island Congressional Medal of Honor, which is the highest award that can be given to a naturalized U.S. citizen. She has won the Hispanic Heritage Award, an MTV Video Music Award, two cable television ACE Awards and the 1993 National Music Foundation's Humanitarian of the Year award. She is also the recipient of the American Music Award for Lifetime Achievement. In November 2015, it was announced Estefan, along with her husband, would be awarded the Presidential Medal of Freedom by President Barack Obama for her contributions to American music.