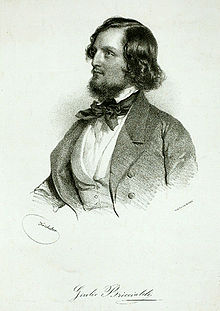 Briccialdi began studying flute with his father. After his father’s death, the 14-year-old Briccialdi moved to Rome to pursue a musical career and avoid the family pressure to join the priesthood. His first appointment was to the Santa Cecilia Academy in Rome at the age of 17.

While in Rome he studied composition and, in 1835, began teaching flute at the Academy of Santa Cecilia. He then moved to Naples, where he was the flute teacher for the royal family. Over the next couple of years he worked in Naples and Milan, and was flute teacher to the King’s brother. Then in 1841 he toured Europe and America, finally settling in London the following year.

In London he become a director of the instrument making firm Rudall and Rose and was responsible for several mechanical developments which are still in use today. He was appointed professor of flute at the Conservatoire in Florence in 1870, and remained there until his death in 1881. In 1996 the asteroid N. 7714 was named in his memory.

Briccialdi, known as “the Paganini of the flute,” was a remarkable virtuoso who toured Europe as a soloist and was responsible for several technical improvements to the flute—now standard features on the instrument.