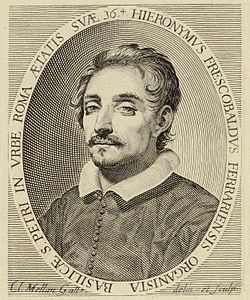 Frescobaldi studied under Luzzasco Luzzaschi, a noted composer of madrigals and an organist at the court of Duke Alfonso II d'Este. Contemporary accounts describe Frescobaldi as a child prodigy who was "brought through various principal cities of Italy"; he quickly gained prominence as a performer and patronage of important noblemen. He studied under Luzzasco Luzzaschi in Ferrara, but was influenced by many composers, including Ascanio Mayone, Giovanni Maria Trabaci, and Claudio Merulo. In his early twenties, Frescobaldi left his native Ferrara for Rome.

Girolamo Frescobaldi was appointed organist of St. Peter's Basilica, a focal point of power for the Cappella Giulia (a musical organization), from 21 July 1608 until 1628 and again from 1634 until his death.

He was one of the most important composers of keyboard music in the late Renaissance and early Baroque periods. His printed collections contain some of the most influential music of the 17th century. His work influenced Johann Jakob Froberger, Johann Sebastian Bach, Henry Purcell, and countless other major composers. Pieces from his celebrated collection of liturgical organ music, Fiori musicali (1635), were used as models of strict counterpoint as late as the 19th century.