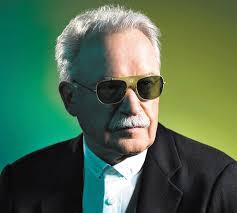 Moroder made his first steps in music in the Scotch Club in Aachen and then released a few singles under the name "Giorgio" beginning in 1963 after moving to Berlin, singing in Italian, Spanish, English, and German.

Dubbed the "Father of Disco", Moroder is credited with pioneering electronic dance music, and his work with synthesizers had a huge influence on several music genres such as Hi-NRG, italo disco, new wave, house and techno music.

When in Munich in the 1970s, Moroder started his own record label called Oasis Records, which several years later became a subdivision of Casablanca Records. He is the founder of the former Musicland Studios in Munich, a recording studio used by many artists including The Rolling Stones, Queen and Elton John. He produced singles for Donna Summer. During this period, he also released many albums, including the synthesizer-driven From Here to Eternity (1977) and E=MC2 (1979), the first album to be entirely digitally recorded.

He later began composing film soundtracks and scores, including Midnight Express, American Gigolo, Superman III, Scarface, The NeverEnding Story, and the 1984 restoration of Metropolis. The soundtrack for the film Midnight Express, which contained the international hit Chase, won an Academy Award and a Golden Globe.

Morodor has created a score of songs for many performers including David Bowie, Kylie Minogue, Blondie, Japan and France Joli. Moroder has stated that the work of which he is most proud is Berlin's Take My Breath Away, which earned him two Golden Globes (for Best Original Score and Best Original Song) and the Academy Award for Best Original Song in 1986. In addition to the three Academy Awards and four Golden Globes, Moroder has also received four Grammy Awards, two People's Choice Awards, and more than 100 Golden and Platinum discs. In 2004, he was inducted into the Dance Music Hall of Fame.