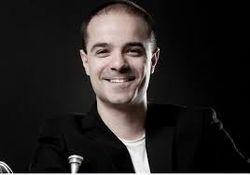 Gille Rocha (b. 1988, Sion, Switzerland) is a Swiss composer and euphoniumist.

It was at the age of 8 that Gilles Rocha entered the music school of Concordia de Vétroz, his village society, and received his first baritone lessons with the famous Swiss composer Bertrand Moren. Very quickly, he won several cantonal and national competitions. Internationally, he has two second consecutive places in the Intermusica competition in Birkfeld, Austria (2006 and 2007). In 2009, at the Brass Band world championship in Kerkrade, he won the prize awarded to the best soloist of the competition.

In 2010, when he entered the Bern University of the Arts, Gilles changed his instrument and devoted himself exclusively to euphonium. During his studies, he worked with Thomas Rüedi, soloist of national and international fame.