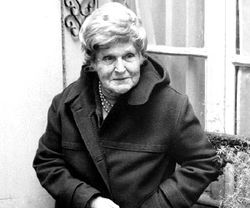 Tailleferre studied at the Paris Conservatory, where she gained the highest awards. She was staunchly allied to her fellow French composers friends Darius Milhaud and Arthur Honegger, was called upon by Erik Satie and Jean Cocteau to be part of “Les Six” or “Group of Six” (along with Poulenc, Auric and Durey). These young composers, with Cocteau’s encouragement, rebelled against the impressionistic “fog” and the “pathos” of Wagner. Their inspiration included popular and traditional musical forms. In Germaine Tailleferre one always finds a respect for musical tradition, in particular that of the 17th century masters, along with an instinctive use of polytonality.

A friend of Stravinsky, Diaghilev, Ravel, Chaplin and Picasso, and a collaborator with the greatest writers of her time, Germaine Tailleferre’s optimistic music has captivated some of the most celebrated musicians, as well as prestigious conductors, including Pierre Monteux, Thomas Beecham, Léopold Stokowski, and Serge Koussevitzky. She left behind some 400 works, including piano and chamber music, symphonic works, ballets, operas, film music, and various melodies.