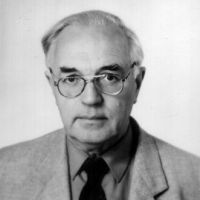 Georgy Salnikov (b. 12 July 1923, Moscow) is a Russian composer and educator.

Salnikov began playing piano at the age of seven. He credits one of his first teachers, Nikolai Kudelin, for inspiring him to love music and to become a musician. He studied piano with Vladimir Sofronitzky at the Moscow Conservatory, graduating in 1948. Later he studied composition with Yuri Kochurov and Oles Chishko at the Petersburg (Leningrad) Conservatory. After receiving his diploma in 1953, Salnikov joined the military faculty (as a civilian) the Moscow Conservatory. He began teaching classes in band instrumentation and later became professor of instrumentation for both wind and symphony orchestras.

Deeply interested in the problems related to arranging orchestra works for band, he wrote a thesis on the topic and published a book titled The Arrangement of Symphonic Compositions for Wind Band (Moscow: Muzyka) in 1969. Salnikov also took part in writing two manuals on the instrumentation of the wind band: Part I (Moscow: Muzyka, 1978) and Part II (Moscow: Muzyka, 1984). In 1994 he began writing a manual titled Practical Advice on Instrumentation and Composition for Wind Band. The music and the personality of Mikhail Glinka, the so-called “father of Russian music," also received much attention from Georgy Salnikov. In addition to writing a monograph, Glinka in Smolensk (Moscow: Moskovsky Rabochy, 1983), he has written a number of articles on that composer’s orchestra.

Salnikov’s compositions show the influence of Glinka well as Sergei Prokofiev and Maurice Ravel. He has produced works in various genres, ranging from chamber music to opera and including approximately 50 scores for wind band.