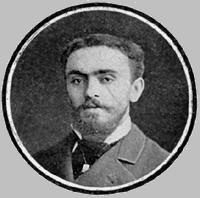 Georges Hüe (6 May 1858, Versailles, France – 7 June 1948, Paris) was a French composer. Hüe was into a noted family of architects. His musical education included studies with Charles Gounod and César Franck. In 1879, he won the Prix de Rome with his cantata Médée. Upon his return to Paris, the Opéra Comique produced his first stage work, Les Pantins (The Jumping Jacks). This plotless, two-act set-piece for four singers doubling roles completely ignored fashionable realist trends of the day, and won high acclaim. For the next twenty years, his musical career went in other directions.

Hüe's most successful work with the public was Dans l'ombre de la cathédrale, whose topical plot was driven by the conflicting ideals of socialism and Catholicism. During his lifetime, Hüe wrote a broad range of other compositions, of which his choral works are most noteworthy. Some pieces for flute are occasionally performed, including Fantasie for flute and orchestra (composed in 1913 for flute and piano and orchestrated in 1923), written for Adolphe Hennebains, legendary professor of the Paris Conservatory.

Hüe's music met with limited success mainly because his style did not change with the times. However, he was an often inspired composer whose works garnered the admiration of several famous colleagues.