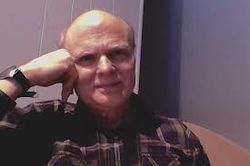 Geoffrey Stanton (b. 18 May 1956, Streator, Ill.) is an American composer, performer and educator.

Dr. Stanton holds a doctorate in composition from the University of Michigan. He is a member of the music faculties at Eastern Michigan University and Concordia University. He has formerly served on the faculty at Marygrove College in Detroit. He has received numerous composition awards, fellowships, and commissions, including a Charles Ives Fellowship, fellowships at Tanglewood and Aspen, and grants from the Jacob Javits Foundation, the American Composers Forum, Rockefeller Foundation, and the National Endowment for the Arts. His music has been performed throughout Europe and the United States. Stanton is a seasoned performer/recitalist (piano, organ, electronics) and clinician. He has served as composer-in-residence for the Brecht Theater Company in Ann Arbor, organized and led two Michigan statewide choir tours of Germany, performing on radio broadcasts there. Stanton has been recognized as a semifinalist in the American Prize Professional Orchestral and Choral Composition Competitions.

Dr. Stanton directed a mass choir in one of his compositions for a national convention of the NAACP at Cobo Hall, Detroit. He has adjudicated for several composition competitions as well as choral festivals. His music is best described as ‘high-energy eclectic’, with influences from jazz, rock, and electronic genres. The American Academy of Arts and Letters in New York cites him as “a composer of formidable talent, skill, and versatility”. He is the author of two books and is published by Wayne Leupold Editions, Morningstar, Moeseler, and Kendall Hunt.