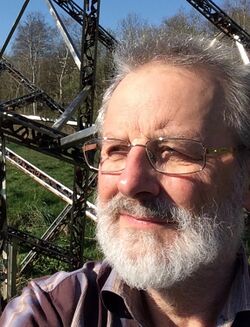 Geoffrey Poole (b. 9 February 1949, Ipswich, Suffolk, England) is a British composer and educator.

Poole's London debut for a capella group The King's Singers, Wymondham Chants, was an immediate hit in March 1971 and has since been toured to almost every country and widely distributed by recordings. His first orchestral work, Visions for Orchestra was considered by Paul Griffiths as "strikingly true to its age ... so individual a work that it held its own alongside Frederick Delius's Brigg Fair and even William Walton's Belshazzar's Feast".

The following decade saw Poole’s attention turn to dance and theatre work, and to the human experience as citizens of an interconnected world. His well-received works of the 1980s, such as Ten for piano, and his first two string quartets, are inspired by familiarity and close study of specific African and Indian cultures. Between the 1990s and the current day [2022], Poole returned to England, turning his attention inwards and creating a series of musical miniatures based on the ancient Chinese catalogue of perpetual change, I Ching.