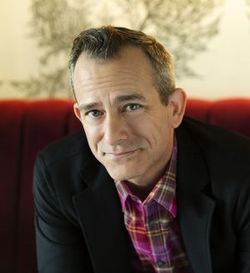 Geoffrey Zanelli (b. 28 September 1974, Westminster, Calif.) is an American composer of film scores.

Zanelli is a graduate of the Berklee College of Music. He began his musical career as a guitar player and songwriter for local acts in Southern California. While attending the Berklee College of Music on scholarship, Zanelli dual majored in film scoring and music production/engineering. He was the recipient of both the Doug Timm Award in recognition of his film scoring work and the Music Production and Engineering Scholar Award.

In 1994, Hans Zimmer met Zanelli. Believing him to be a promising young talent, Zimmer invited him to Los Angeles to join his group of film composers. Zanelli earned a reputation as a workhorse while working as an engineer on the debut album from Goldfinger as well as Zimmer's Oscar Award-nominated score for The Preacher's Wife.

Zanelli's experience and desire to collaborate led him to work with British composer John Powell on his first Hollywood feature, Face/Off. Throughout the following years he built the foundation for his scoring career, composing with Powell, Hans Zimmer, Harry Gregson-Williams and Steve Jablonsky on many feature films, including: Pirates of the Caribbean: On Stranger Tides, Rango and the Golden Globe-nominated scores for The Last Samurai and Pearl Harbor.

One of his earliest solo works, Steven Spielberg's miniseries Into The West, earned him an Emmy. In approximately one year, Zanelli scored the films Disturbia, Hitman, Outlander, Delgo, Ghost Town and Gamer. Harking back to his days as a songwriter, he co-wrote the song Don't Make Me Wait for Disturbia.

He currently writes at Hans Zimmer's Remote Control Productions. In 2017, he composed the score to Pirates of the Caribbean: Dead Men Tell No Tales, picking up the mantle from long-time series composer Hans Zimmer.