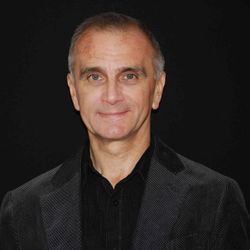 Gary Kulesha (b. 22 August 1954, Toronto, Can.) is a Canadian composer, conductor, pianist, and educator.

Kulesha has these degrees: ARCT (associate diploma) piano (1973), LTCL (licenciate) theory (1976), ARCT composition (1978), and FTCL (master's level) composition (1978). Kulesha was a pupil of William G. Andrews and Samuel Dolin at the Royal Conservatory of Music and also studied composition in England with John McCabe (1978-81) and in New York with John Corigliano (1982). He has received numerous awards and scholarships, including Canada Council grants.

Mr. Kulesha's music has been commissioned, performed, and recorded by musicians and ensembles all over the world. His Angels for marimba and tape has become a standard repertoire item for percussionists and receives over a hundred performances per year. Works such as Mysterium Coniunctionis for clarinet, bass clarinet, and piano, and the Sonata for Horn, Tuba, and Piano, are performed regularly in England and Europe, and are often taught as part of performance curricula in these places. Celebration Overture is one of the most performed orchestral pieces written in Canada.

In 1988, Mr. Kulesha served as composer in residence with the Kitchener-Waterloo Symphony Orchestra, from 1988 to 1992. In 1993, he was appointed Composer in Residence with the Canadian Opera Company, a position he held until the end of 1995. He was then appointed composer-advisor to the Toronto Symphony Orchestra, where his duties include composing, conducting, and advising on repertoire.

Mr. Kulesha was one of three composers awarded the first National Arts Centre Orchestra Composer Award in 2002. This began an extended relationship with the NACO and its artistic director, Pinchas Zuckerman.

In 1986, he was named Composer of the Year by PROCanada, the youngest composer ever so honoured. Also in 1986, he represented Canada at the International Rostrum of Composers in Paris. In the summer of 1990, he was the first composer ever appointed to the position of Composer in Residence with the Festival of the Sound in Parry Sound, Ontario. He continued to direct this programme from 1996 until 2004. In 1990, Mr. Kulesha was nominated for a Juno award for his "Third Chamber Concerto." He was nominated again in 2000 for "The Book of Mirrors."

Mr. Kulesha is on the full-time faculty of the Faculty of Music at the University of Toronto.