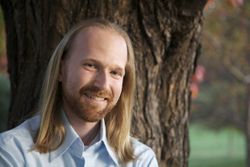 The title of this work is correctly punctuated [fuse] and is intentionally written in lower case.

[fuse] was originally composed in 2014 for chamber orchestra on a commission for Mizzou International Composers Festival for Alarm Will Sound. Originating from a 16-bar blues form played by the clarinets, [fuse] is influenced by a number of pop music genres, including rock, heavy metal, funk, and disco. These styles are brought to life through the drum set, which gives the piece its singular character. [fuse] is also quite a workout for the clarinets, with fast interlocking figures functioning as a backbone for the entire piece.

The work was begun while in residency at Copland House, Cortlandt Manor, New York, as a recipient of the Copland House Residency Award. It was transcribed for wind ensemble in 2015.