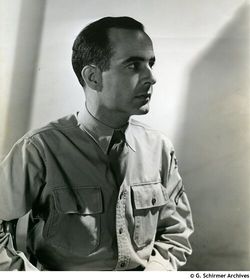 Subtitle: Based on the Army Air Corps Song

In autumn of 1942, the 32-year-old Samuel Barber (1910-1981) was already a highly lauded composer. However, as the United States was engaged in World War II, he was drafted into the United States Army Air Corps (now the United States Air Force), stationed at Ft. Worth, Texas, and became known as Corporal Samuel Barber. Barber’s time in the service allowed him the liberty to write music with the war effort in mind (Commando March, Funeral March, and Second Symphony) while also composing works for other creative projects while he was off-duty (Excursions, Capricorn Concerto, etc.).

From his service-time pieces we have Commando March (1943) -- a staple of the wind band repertoire -- the Funeral March (1943), and the Second Symphony (1944), a composition Barber later withdrew from his catalog. In fact, after an attempt to revise the symphony, he was reportedly so dissatisfied with the work that he not only withdrew the piece from his catalog, but also oversaw the destruction of the performance masters in the G. Schirmer library with assistance from his publisher, Dr. Hans W. Heinsheimer.

The Funeral March, catalogued as “H-104” in Barbara Heyman’s Samuel Barber: A Thematic Catalogue of Complete Works, is a spectre-like fantasy on the U.S. Army Air Corps Song and is the only other work to come from Barber’s time in the service. The vetted history of its creation may never be known, but this work sits unique in Barber’s catalog being the sole composition where, rather than leaving a fair copy of a fully realized, full score manuscript, he left only a three-page, heavily annotated, short score manuscript: a musical roadmap of instructions on how to create the fully orchestrated version for wind band.

This publication is the fully realized performance edition of the Funeral March short-score manuscript, which utilizes similar instrumentation to Barber’s Commando March, composed at essentially the same time and for the same organization. Yet unlike Commando March, where Barber orchestrated the work for wind band and then arranged it for orchestra (on Koussevitzky’s request, also in 1943), the Funeral March will only ever be connected to the composer as a work for wind band.