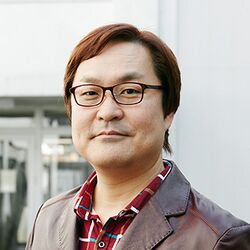 Fumio Tamura (b. 1968, Suginami, Tokyo, Japan) is a Japanese Composer.

Tamura joined the band in Saitama Prefectual Kawagoe High School. He earned an M.A. degree in composition at the Tokyo University of Fine Arts and Music with Jo Kondo, and at the Guildhall School of Music and Drama, London, with Robert Saxton where he was granted a fellowship under the Japanese Government Overseas Study Program for Artists from 1995 to 1997.

Mr. Tamura has won prizes including The Valentio Bucchi International Composition Competition Prize in Rome, The JACA Award for Theater Arts, The National Theatre Award, and Honorable commendation on Genesis Prize for Opera 2002.

He is a member of The Japan Federation for Composers, Tempus Novum, The Japan Electronic Music Society, Ensemble Contemporary α, and Pro Musica Nipponia, as a composer and a director.