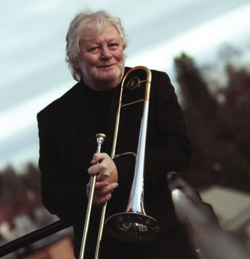 Thingnæs was introduced to music at eight years old, when he started to play in a Sinsen school band. His first instrument was the trumpet, but in 1953 he took up the trombone. Due to his success at a young age, he was able to continue his musical education at the Royal Danish Academy of Music in Copenhagen, where he met other rising musicians.

From 1959 onward, Thingnæs met and performed with the bands of Bjørn Jacobsen, Gunnar Brostigen, Mikkel Flagstad and Kjell Karlsen. Starting in 1961, he led his own quartet, which over time included Egil Kapstad, Terje Rypdal, Laila Dalseth, Espen Rud, Bjørn Alterhaug and Per Husby. However, it was the Frode Thingnæs Quintet (including Henryk Lysiak, Jan Erik Kongshaug, Pete Knutsen, and Thor Andreassen) that was included on Norway's first jazz album, released in 1963.

Although Thingnæs is best known for his role in the jazz community, he also made major contributions to many areas in Norwegian music. In 1960, he took the prestigious role of kapellmeister at Norway's most famous revue theater, Chat Noir. While there, he collaborated with entertainers including Einar Schanke, Alfred Næss and actor Yngvar Numme. He also worked with the rock band Popol Ace and conducted the Norwegian Radio Orchestra.

In addition, Thingnæs worked as a conductor at two Oslo theaters, the Forsvarets staff music corps and, for over thirty years, the Kampen Janitsjarorkester. He composed for the Melodi Grand Prix in 1974 "Hvor er du?" and the 1976 "Mata Hari". His Flåklypaballetten for symphony orchestra was performed at the Norwegian Opera in 1985. In the same year, Thingnæs created his Sonnets to Sundry Notes of Music for symphony orchestra, big band and choir, based on texts by Shakespeare. His most renowned original works may be Wheels and the Flåklypa ballet (1985), performed at the Norwegian National Opera. In his latter years, he led a quintet together with Harald Gundhus.