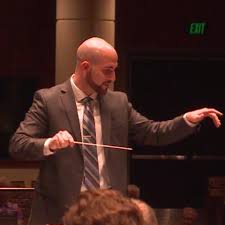 While the members of our Armed Forces signed up to serve our country in times of war, none of them knew that they may bring the war back home with them...

Freedom is an uninterrupted, three-movement work detailing the struggles associated with post-traumatic stress in the lives of American heroes, and the process of overcoming it. The piece is meant to bring about awareness of the vast number of American servicemen and women who struggle with post-traumatic stress after serving, help erase the negative stigma that surrounds the disorder, and encourage others to take action in one way or another. My hope is that performers and audience members will be inspired to give back in some way. I hope that it makes a positive difference in the lives of the heroes it is dedicated to.

Freedom was commissioned by 38 ensembles and contributors which make up the "Freedom" consortium. Every single penny spent by the consortium members ($2,000!) was donated to the Semper Fi Fund (www.semperfifund.org). A percentage of the lifetime sales of the piece will be donated yearly to the Semper Fi Fund.

i. A Hero’s Return. This movement is meant to represent the homecoming of an American hero returning from deployment. There are moments filled with valor and pride, followed by the elation of being reunited with family after months of separation, loneliness, and constantly living with the fear of possibly never making it home. The warm embrace of loved ones soon gives way -- seemingly out of nowhere -- to something darker, something painful, something that the hero thought he had left behind when his tour had ended…

ii. Trapped in a Memory… The second movement depicts an internal struggle within the hero. The themes of comfort and elation from the first movement have now transitioned into themes of emotional pain. The hero fights to suppress the feelings, emotions, and memories that are beginning to resurface. The internal conflict grows exponentially as the hero is drowning in anger, terror, and agony until he can no longer fight back. He is immediately transported back to a time and place he never wished to think about again. He is frozen in place, watching horrific events he had already lived through once before unfold around him again. He has no choice but to sit -- surrounded by the sights, sounds, and smells of the battlefield -- and experience these painful memories until they begin to fade away.

iii. Freedom. The final movement is not necessarily programmatic, but, instead, representative of the hero’s future as he overcomes his struggles with post-traumatic stress. This movement is optimistic. It’s reflective. It’s determined. And it represents what I wish for every veteran dealing with mental illness: Freedom. It is unfortunately ironic that many of the brave men and women who protect our freedom unknowingly sacrifice some of their own… There should be no stigma surrounding post-traumatic stress disorder. Veterans should not feel embarrassed to discuss it with their family, friends, and therapists. It’s up to us to help them overcome the mental obstacles that develop after serving.

This piece is intended to make a difference in the lives of heroes to whom it is dedicated. I hope that it inspires the performers and audiences who experience it to take action, and to repay the debt that we owe every single American Hero.