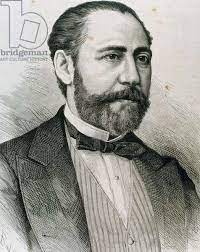 Barbieri was born and died in Madrid, appropriately, since the themes and characters of his operas are often distinctly Spanish and Madrilenian. Among the characters featured by Barbieri are bullfighters, manolos and manolas, and even (in Pan y Toros) the famous Spanish painter, Francisco Goya.

The character of much of Barbieri’s work is farcical, utilizing mistaken identity and other devices to entertain the audience. His themes deal largely with the ins and outs of love, and the relations between the upper and lower classes in nineteenth-century Spain, but there is also a distinct political character to much of his work. The zarzuelas El Barberillo de Lavapiés and Pan y Toros both contain plots to overthrow the government.

In addition to his compositions, Barbieri was also an accomplished musician. He was the founder of La España Musical (a society for the promotion of Spanish operetta) and the Society for Orchestral Music.