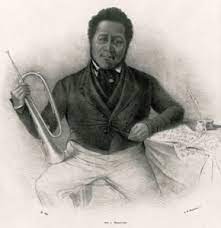 Johnson directed military bands and society dance orchestras, taught music, and performed on the violin and keyed bugle. His early career consisted of performing for balls, parades, and dancing schools. He first became widely known in 1818 when George Willig published Johnson's A Collection of New Cotillions. His career flourished in the 1820s, as he performed arrangements of "fashionable" music for most of the major dance functions in Philadelphia.

In 1837 Johnson and a small ensemble of African American musicians sailed to England to take part in the celebrations surrounding the ascent of Queen Victoria to the British throne. While there, he was exposed to the promenade concert style. When Johnson returned from England in 1838 he introduced this new style of concert in Philadelphia during the Christmas season.

African American composers were rare in the U.S. during this period, but Johnson was among the few who were successful. Performing as a virtuoso of the (now rare) keyed Kent bugle and the violin, he wrote more than two hundred compositions of various styles—operatic airs, Ethiopian minstrel songs, patriotic marches, ballads, cotillions, quadrilles, quicksteps and other dances. Only manuscripts and piano transcriptions survive today.