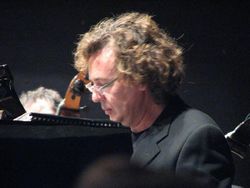 Francesco Sartori (b. 1957) is an Italian composer and performer.

He is best known for composing Con te partirò (With you, I will leave) with Lucio Quarantotto for blind tenor Andrea Bocelli. The song was also recorded by Jonas Kaufmann with Orchestra Sinfonica Del Teatro Massimo Di Palermo directed by Asher Fisch and as a duet entitled Time to Say Goodbye with Andrea Bocelli and Sarah Brightman.

The pair also composed Canto della Terra and Immenso, both recorded by Bocelli for his 1999, Sogno album and Mille Lune Mille Onde, for his 2001 album Cieli di Toscana. Canto della Terra was also later recorded as a duet between Bocelli and Brightman in 2007.

Sartori and Quarantotto, working for Sugar Music, have composed much of Bocelli's pop repertoire.