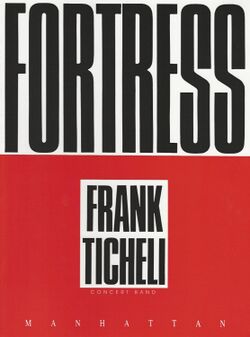 Fortress was composed in 1988 and received its premiere performance in Iron County, Michigan, by the Batawagana Youth Camp Band. Ticheli wrote the piece while serving on the faculty of Trinity College in San Antonio, Texas, making Fortress one of his earlier compositions for the wind band. The piece is based upon short motive ideas, which Ticheli develops, layers, and sets in imitative textures throughout the piece. Each work can be traced back to the interval of a tritone, an important trend throughout the work.

Fortress was composed as a tribute to the composer's former band director, Robert Floyd of Richardson, Texas. Although Ticheli was already an international award winner, this was his first published work for concert band.

The first 19 bars of Fortress are taken from the composer's piano score for a 1987 theater production of Moliere's Don Juan. Of the dozens of short snips, each of which portrays a different character, this passage represents the dual personality of Don Alonso -- on the one hand chivalrous and honor bound; on the other hand sinister and ruthless.