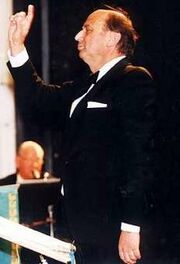 Foglariana (Youth Suite) is dedicated to Jaroslav Foglar (1907-1999), the author of the most successful Czech comics, The Fast Arrows (Rychle sipy). Famous as a writer of books for teenagers, Foglar was active as a leader in the Boy Scout movement. Zámečník himself experienced him as leader. He also worked as the editor of two boy scout magazines and as the leader of the scout troop, Dvojka. When the communists came to power in 1948, he did not have an easy life. His books were prohibited except for a brief period in the 1960's. After the events of 1989, his work received several awards and his books became enormously popular. The complete Fast Arrows edition recently still tops the bestseller lists.

Foglariana (Youth Suite) was written in 1997 to commemorate Foglar's 90th birthday on June 7th. It is based upon the motifs from Foglar's books, The Beaver River Boys and Fast Arrows. The contrasting five movements include an intrada, a march, a percussion solo, the full moon song, and a finale.