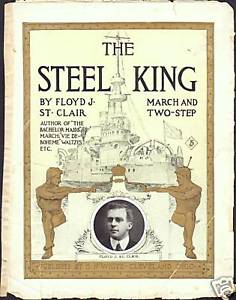 At age four, St. Clair's parents moved to Braddock, Pennsylvania, where he attended the public schools. He began to study music seriously while a teenager.

Before the age of 21, St. Clair had become director of the Edgar Thompson Steel Works Band, which had been founded by Charles M. Schwab, general manager of the steel plant. St. Clair dedicated his most popular march, The Steel King, to Schwab. He dedicated The Iron King to another benefactor of the band, Andrew Carnegie, who had donated instruments and uniforms.

In 1892, St. Clair founded the Gounod Orchestra, and it soon became well known throughout Pennsylvania and the surrounding states. He managed and directed this group for ten years, at which time he formed another successful orchestra which he led until he left Pennsylvania.

He was very active in the music world as a composer, organist, cornetist, and arranger. In addition to his marches and concert works, he also composed music for organ, piano, and orchestra. One of his marches was composed under the pseudonym S.J. Floyd. He served as organist for the Calvary Presbyterian Church in Braddock, Pennsylvania, for 16 years and was popular as a music teacher.