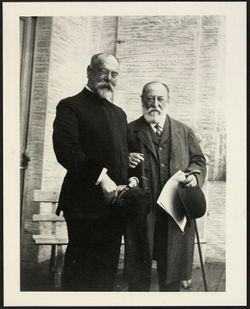 On 17 December 1921, The New York Times ran an obituary: “Saint-Saëns, Great Composer, Is Dead.” The final line of the lengthy tribute reads: “It will be recalled that on his visit to California in 1915 he completed an elaborate work, 'Hail! California, dedicated to the Panama-Pacific Exposition.” Hail! California is mentioned in many articles and biographies of Saint-Saëns, but little is known of the work – sometimes even debating the genre, orchestration, and forces necessary to perform the composition. If The New York Times was privy to the composition a handful of years after it was written, and considered it sufficiently important within Saint-Saëns's oeuvre to be included in the official obituary, why is it not a more formally acknowledged work today?

By 1915, the once young and prodigious Camille Saint-Saëns was now an octogenarian and was being viewed as a pillar of the old guard of music. The elder statesman was appointed by the French government as “First Delegate to the Franco-American Commission for the Development of Political, Economic, Literary, and Artistic Relations” for the 1915 Panama-Pacific Exposition in San Francisco, a cultural celebration to commemorate the opening of the Panama Canal. For this occasion, Saint-Saëns gave lectures, conducted concerts of his music, and also composed a new work for the occasion: Hail! California, which was scored for a full orchestra of 80, organ, and supplemental wind band of 60.

Previously, Saint-Saëns had composed three known works for band: Orient et occident (1869), Hymne franco-espagnol (1900), and Sur les boards du Nil (1908). With the “Finale” to the massive Hail! California, he in essence composed another work for band, this time featuring the band with orchestral accompaniment and interplay. The final six minutes of the work featured John Philip Sousa's Band at the premiere along with interjections from the orchestra, two organ interludes, and brilliant tutti sections for the entire ensemble. Since the “Finale” is predominantly scored for band, and a full score for the band conductor does exist, it becomes easier to characterize the “Finale” as a work for wind band.

What Saint-Saëns composed for the Exposition was a work that attempted to unite France and the United States. What better way to make a statement of the French and Americans joining forces – musically and politically – than incorporating the national anthems of the two countries into his composition for the Exposition? Thus, La Marseillaise and The Star-Spangled Banner are masterfully woven together in the “Finale” of Hail! California.

The premiere of Hail! California featured a full orchestra, an organ, and the Sousa Band. The critic of The San Francisco Examiner noted the pleasure that Sousa and other musicians took in watching Saint-Saëns conduct. The entire work was performed three times at the Exposition under the composer's direction, although it is the third performance on Sunday, 27 June, which may have been what led to the creation of the additional music for winds after an ordeal arose with the organ: “The mighty organ developed a mighty cipher. The moving of the console to and fro had caused friction in the cables and every pipe suddenly sounded simultaneously. An unearthly roar bellowed forth; in a faltering speech the organist (Wallace A. Sabin) tried to explain to the audience that repairs were being done while his inadequate French and the composer's unwillingness to converse in English added to the disorder. It was decided to abandon the instrument, but just as the stage-hands began to move the console the tumult ceased and the organ became as docile as it should have been at the start.”

The 2015 Centennial Performing Edition by Peter Stanley Martin utilizes all of the original music for wind band composed by Saint-Saëns for Hail! California and spans a range of the final six minutes of a larger work that some have analyzed as having various sections or themes, whereas there are those that consider the work one continuous tone poem.

- Selections of the Program Note from Mad Monk Music Press