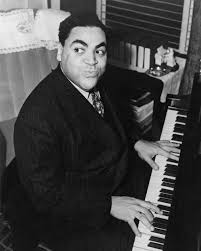 Waller was the youngest of 11 children. He started playing the piano when he was six and graduated to playing the organ at his father's church four years later. His mother instructed him in his youth, and he attended other music lessons, paying for them by working in a grocery store. Waller attended DeWitt Clinton High School for one semester, but left school at 15 to work as an organist at the Lincoln Theater in Harlem, where he earned $32 a week. Within 12 months he had composed his first rag. He was the prize pupil and later the friend and colleague of the stride pianist James P. Johnson.

Waller's first recordings, Muscle Shoals Blues and Birmingham Blues, were made in October 1922. That same year, he also made his first player piano roll, Got to Cool My Doggies Now. Waller's first published composition, Squeeze Me, was published in 1924.

His innovations in the Harlem stride style laid the groundwork for modern jazz piano. His best-known compositions, "Ain't Misbehavin'" and "Honeysuckle Rose", were inducted into the Grammy Hall of Fame in 1984 and 1999.