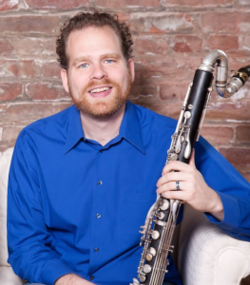 Fantasy on Five is a double concerto of sorts for solo soprano and baritone saxophones with wind ensemble. It plays with the idea of “five-ness” in several different ways. First, much of the work is in a five-beat rhythmic meter. This is a particularly rich number of pulses to have in a measure, as it can be grouped in a unique variety of ways: unevenly (2 + 3 or 3 +2), in a circular palindrome pattern (2 + 1 + 2), or in single groupings of five. It is probably the largest number of pulses that can potentially be heard without subdivisions: even meters naturally subdivide into twos, while odd meters of seven or higher inevitably break down into subgroupings of two and three.

Second, the entire work is based on the pentatonic (or five-note) melody with which the solo saxophones begin. The pentatonic scale is as close to universal as anything is in music, appearing in folk music traditions the world over. It is also generally considered to be the smallest number of pitches that can be heard to form a complete scale (rather than a subset of a larger pitch collection).

Finally, the accompaniment figures in much of the work are built on the interval of the perfect fifth. This is the second interval in the overtone series, and the first interval that can be heard as a distinct pitch (as opposed to the octave, which creates the “same” note an octave higher). Thus, each of these elements based on five have unique, and in many ways musically primal qualities. These interlocked five patterns form the backbone of the work, and are developed rather freely throughout. The soloists are generally treated as an interlocked pair of voices in dialog with the wind ensemble. Though generally quite rhythmically driving, there are also moments of lyricism and improvisatory wildness.

Fantasy on Five was commissioned and premiered by the Bando/Wintringham saxophone duo with the Eastman Wind Ensemble.