Even When He Is Silent 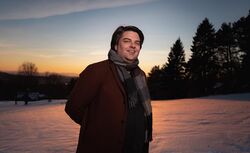 Even When He Is Silent was originally written for both SATB and SSAA choir, and commissioned by the St. Olaf Festival (Olavsfestdagene) in Trondheim, Norway, in 2011.

The text was written by an anonymous writer, a prisoner in Germany during World War 2 and was found written on a wall: A work about hope in the darkest time of life.