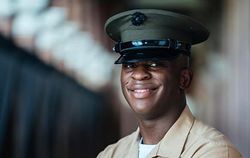 Evan Middleton (b. 16 September 1991, Springfield, Va.) is an American composer and arranger.

Mr. Middleton is a graduate from the University of Tennessee, Knoxville, earning a Bachelor of Arts degree in music performance.

While composing, Evan works as a member of “The Commandant’s Own,” the United States Marine Drum & Bugle Corps in Washington, D.C., where he has been a member for six years as a baritone bugler. He has written various brass arrangements for the ensemble in large and small configurations of the group.