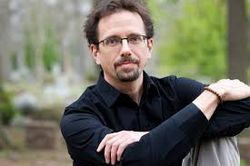 Evan Chambers (b. 1963, Alexandria, La.) is an American composer, educator and fiddler.

Dr. Chambers received BM in viola performance at Bowling Green State University, and master's and DMA with high honors in composition at the University of Michigan. His composition teachers include William Albright, Leslie Bassett, Nicholas Thorne, and Marilyn Shrude, with studies in electronic music with George Wilson and Burton Beerman.

Dr. Chambers' compositions have been performed by the Cincinnati, Kansas City, Memphis, New Hampshire, and Albany Symphonies; he has also appeared as a soloist in Carnegie Hall with the American Composers Orchestra. He won first prize in the Cincinnati Symphony Competition, and in 1998 was awarded the Walter Beeler Prize by Ithaca College. His work has been recognized by the American Academy of Arts and Letters, the Luigi Russolo Competition, Vienna Modern Masters, NACUSA, the American Composers Forum, and the Tampa Bay Composers Forum.

He has been a resident of the MacDowell Colony, and been awarded individual artist grants from Meet the Composer, the Arts Foundation of Michigan and ArtServe Michigan.

Chambers is known for his intense vocal performances of his own works, and is also an Irish-traditional fiddler. He appeared as the fiddle soloist in his Concerto for Fiddle and Violin at Carnegie Hall with the American Composers Orchestra (its second Carnegie performance) and his orchestral song-cycle The Old Burying Ground was also performed in Carnegie Hall.

Dr. Chambers is currently associate professor of composition at the University of Michigan. He also serves as resident composer with the new-music ensemble Quorum.