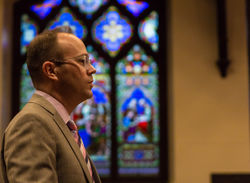 Ethan Wickman (b. 1973, Glendale, Calif.) is an American composer and educator.

Ethan Wickman's music has been performed by soloists and ensembles in venues in the U.S. and around the world. He has received grants and commissions from the Barlow Endowment, Meet the Composer, the American Composers Forum, the Wisconsin Music Teachers Association, the Utah Arts Festival, the San Antonio Opera Guild, and Chicago's Music In The Loft where he was the 2014-15 Composer-In-Residence. He was awarded the Jacob Druckman prize for his orchestral work Night Prayers Ascending at the Aspen Music Festival, the Harvey Phillips Award for his work Summit from the International Tuba Euphonium Association, first place in the Utah Arts Festival Chamber Commission Competition, and was a finalist in the 25th annual ASCAP Rudolf Nissim Orchestral Composition Competition. He has received fellowships from the Aspen Music Festival, the Norfolk Contemporary Music Workshop/Yale Summer School of Music, the Wellesley Composers Conference, the American Composers Orchestra/Earshot New Music Readings, and from the U.S. State Department as a Fulbright Fellow in Madrid, Spain.

His works have been performed by such ensembles as the Aspen Concert Orchestra, the Avalon String Quartet, the Soli Ensemble, the Newton Symphony, the Gryphon Trio, Flexible Music, the Minneapolis Trio, the Novo Ensemble, Ensemble 61, the Post-Haste Reed Duo, Zeitgeist, and by many performers at venues such as Carnegie Hall, the Kennedy Center, and at universities and concert halls both domestic and international.