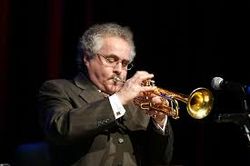 Composer Esko Heikkinen (b. 4 July 1953, Kuusjärvi, Finland) is a multifaceted professional of music, commercial trumpeter and a conductor.

He started playing the trumpet when he was 14 at the Outokumpu wind orchestra and started moving towards a professional career at a young age playing trumpet with his father, Unto Heikkinen, at dance bands.

His professional career started officially when he joined the Kontioranta Military Wind band in 1970 and continued in the Military Music Department of the Sibelius Academy in 1973-74. In the Guard's Band he was the lead trumpeter in 1975-1983.

His first contact with jazz-music was with the Tapiola Big Band, and the flagship of Finnish professional big bands, UMO, joined him in their ranks in 1976. Also important was his work in the Jukka Linkola Octet. Esko Heikkinen received the Yrjö award of the Finnish Jazz-Association in 1998. His current work is done mainly in the UMO Big-Band as a concert master and lead-trumpeter. Heikkinen has also received admiration for his magnificent brass-band arrangements. They are easiest to catch with his own band, Super Brass. Nowadays he works as a conductor of the Helsinki Police Band.