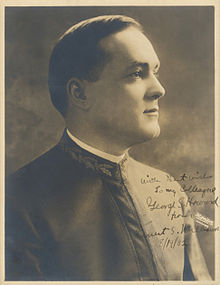 Williams began the study of cornet at age 7 with his father, Samuel E. Williams, a graduate of the Cincinnati Conservatory of Music and a former pupil of the renowned cornet soloist and composer, Herman Bellstedt.

At age 16, Ernest enlisted in the 161st Indiana Volunteer Infantry Regiment and served during the Spanish-American War.  Two years later, he became bandmaster of the 161st Indiana Volunteer Infantry Regiment.  After discharge from the army, he moved to Boston, where he studied cornet with Henry C. Brown.  During the 1902 and 1903 seasons, he played with Sousa's Band, and in the years that followed, he was soloist with the bands of Liberati, Gay, Innes, and Conway.

Williams was conductor of the Boston Cadet Band from 1907 to 1909.  In 1910, he performed with the Boston Band under George Stewart and Emil Mollenhauer, and during that year, he took additional study with Herbert L. Clarke.

In 1915 and 1916, Williams played with numerous symphony orchestras and bands, and from 1917 to 1923 he was principal trumpet player of the Philadelphia Orchestra under Leopold Stokowski.  During the summer seasons of 1918 to 1923, he was also cornet soloist with the Goldman Band.

Williams founded the Ernest Williams School of Music in Brooklyn, New York, in 1922.  With the death of Patrick Conway in 1929, he became dean of the Ithaca Military Band School.  In 1931, summer sessions of the Ernest Williams School of Music were instituted at Saugerties, New York, with a distinguished faculty which included Arthur Pryor, Mayhew Lake, Erik Leidzén, Percy Aldridge Grainger, Ferde Grofé, Morton Gould, and Henry Cowell.  Many pupils of this school, such as Leonard B. Smith and James Burke, went on to become famous in their own right. Williams also taught cornet and trumpet at the Juilliard School of Music and directed the band at New York University.

Among Williams' compositions are several notable band works, including the Symphony for Band, several cornet solos, and marches.  He published these (as well as the works of others) himself, and, after 1922, through the Williams School of Music.  He wrote three instruction books for cornet and trumpet: Modern Method for Cornet, High Tones, and Supplementary Studies.

In 1931, Ernest S. Williams was elected to the American Bandmasters Association and, in 1983, he was posthumously installed in the National Band Association Hall of Fame of Distinguished Band Conductors.

It has been well established that much of Ernest Williams' music was composed by Erik Leidzén.  Leidzén did major arranging on many of Williams' works, and on several others he developed them from sketches or actually ghost-wrote the entire pieces.