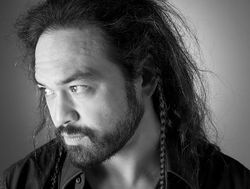 As the first-born in a family of musicians -- father Rosendo Santos, Jr., mother Harriet, brothers Nathan and Jason -- music has always been at the core of his life practice, both as profession and hobby.

Professor Santos has received commissions, prizes, fellowships, and other recognitions for his concert music, including the Charles Ives Scholarship and the Charles Ives Fellowship from The American Academy of Arts and Letters, awards from Broadcast Music Incorporated (BMI), the MacDowell Colony, the Bozeman Symphony, the Civic Orchestra of Chicago, the Rackham Graduate School of U-M, and the Music Teachers National Association (MTNA).

But, in recent years, Santos has become increasingly preoccupied with presenting music in venues other than the classical concert hall -- dance clubs, street corners, radio, theaters, churches, museums, cafes, car stereos, movies, Internet, iPods, etc. -- where there is more emphasis given to the interaction of music with other spontaneous sensory elements, involving listeners at the hub of a transdimensional experience. This interest flourished in 2002, when he was invited to join the pioneering and internationally celebrated Japanese butoh company Dairakudakan: Temputenshiki (avant-garde dance/theater), as resident composer — a potent collaboration which continues to this day.

In 2005, Santos and artist/singer Toko Shiiki formed an upbeat band called October Babies, which has performed a large variety of original multi-cultural and multi-lingual dance songs in America and Japan.

Santos has been an active member of Michigan local original music scene for many years.