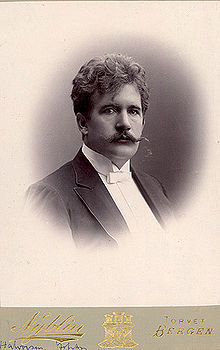 The title also appears in Norwegian as Bojarenes Indtogsmarsch, and "Boyares" is often transliterated as "Boyars."

Halvorsen was living in Bergen, Norway, in 1895 when he was offered a teaching position in Bucharest, Romania. While searching in an encyclopedia for information about Romania, he became interested in the boyars (privileged aristocracy) and decided to write a march in their memory. Encouraged by Edvard Grieg, he wrote out all of the parts in one night and premiered the work the next day with his theater orchestra. Although flattered by the job offer, Halvorsen decided to remain in Bergen for a few more years.

The people of Bergen would have had high expectations when Johan Halvorsen was chosen for the combined post of conductor of the “Musikselskabet Harmonien” and musical director at Bergen’s theater “Den Nationale Scene”. Halvorsen took up the post in the autumn of 1893, and “scored in the first minute”: on September 17 he presented his brand new work Bojarenes Indtogsmarsch. The occasion for this composition was a tempting offer of a post in Bucharest. The offer came up just before Halvorsen was to sign the contract for Bergen, and he came close to accepting. Halvorsen wrote:

“... I got hold of an encyclopaedia to learn more about Bucharest. I read of Queen Carmen Sylva and her love of art, and of the descendants of the rich and distinguished Boyars who had at such and such a time entered Bucharest. Donnerwetter! I thought, this would be a headline for the newspapers. And the Queen! She would at once call me to the royal place along with my quartet. I had to have discharge, and I wrote a march which I called Entrance of the Boyars. Just as I had finished it, that same afternoon, Edvard Grieg came by. “How is it going? Already at work, I see” – he had seen my manuscript on the piano. He read carefully through it and said “It looks very good!” Pleased at his praise I told him it was to be performed at the theater the next day, if he would like to come and listen. He promised he would. After he had left, I sat down and wrote out the parts until late at night ...”

In the paper Bergens Annonce-Tidende, the day after it was performed at the theater, Halvorsen’s piece was reviewed thus: “It is a wonderful and pompous composition which was listened to in breathless silence and ... which produced such long and thunderous applause that Mr. Halvorsen finally had to give in to the audience and perform the piece da capo.” That Edvard Grieg’s praise was indeed heartfelt was something that Halvorsen experienced to the full. Grieg involved himself in the publication of the march; he feared that the publisher might try to cheat the young and inexperienced composer. To Halvorsen he wrote: “... I will not let you be treated the way I was treated in my youth. Let me therefore take this matter into my own hands, and I will see to it as well as I can.” Thanks to Grieg’s effort Halvorsen was paid a fee of 400 kroner – the equivalent of almost 25,000 kroner today.

Since Bojarenes inntogsmarsj was intended as a portrayal of the Boyars -- Russian or Rumanian noblemen -- we might well ask whether the music sounds “Russian” – or “Rumanian”. Øyvind Dybsand addresses the matter in his doctoral thesis on Johan Halvorsen. In pointing out similarities between Halvorsen’s march and Grieg’s piano piece Trolltog (March of the Trolls) (1891), Dybsand concludes: “That this particular melody in itself should be better suited than others for illustrating Norwegian trolls or Russian Boyars is an illusion. It is the titles of the pieces that lead the listener into the composers’ imaginary world.”