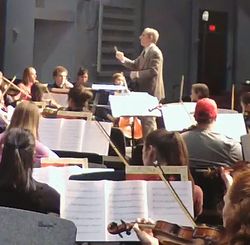 There are five main sections in this piece, each lasting exactly 21 measures. Why this unlikely number? I chose this number because the percussion parts, which are the driving force behind the piece, are based repeating patterns of 6, 7, and 8 eighth notes. It works out that these patterns only line up every 168 half-beats -- which happens only at the end of 21 measures!

The title for this piece was provided by Armstrong High School student Aaron Baker and was used as inspiration for the work. The phrase “endless routes” guided my decision to have several main themes instead of just one or two. The themes are widely different in character but share the feature that they each go to the same place -- the very last half of the last beat of every twenty-first measure.

The minimalist style of music often features short musical fragments that are repeated many times in different combinations, and I used that technique to create a seemingly “endless” effect in the percussion parts. The percussion parts also use a colotomic structure, a technique often used in gamelan music of the Far East. Unlike Western music, which generally has a strong accent on the first beat of a phrase, colotomic music accents the last beat of a phrase. You can hear this in Endless Routes when the percussion parts all become aligned and hit a simultaneous accent at the end of each section.

This piece was commissioned and premiered by the Armstrong High School (Kittanning, Penn.), under the direction of Jason Venesky. Mr. Venesky is a veteran teacher with over twenty years of experience in the Armstrong School District. He is a graduate of Carnegie Mellon University with a Bachelor of Fine Arts in Music Performance (Tuba) degree and Music Education Certification and an active performer as principal tuba for the Butler County Symphony Orchestra; tubist for the Armstrong Brass Quintet and Windsor Brass Quintet; and bass trombonist for the Gibbons Big Band. Mr. Venesky is currently instructor of tuba at Grove City College and music director for the Kittanning Community Band.